Flowers are bright yellow and resemble snapdragons. Flowers are arranged in a raceme at the ends of branches.

Seed capsules are round-ovate, 0.3-0.5 in long, and two-celled. Seeds are brown or black, circular, and surrounded by a notched wing.

Leaves are narrow, lance-shaped, soft, and pale green. Leaves are mainly alternate but lower leaves appear to be opposite due to crowding.

Taproots may be up to 3 ft long. horizontal roots may grow to be several yards long, and can develop adventitious buds that may form independent plants.

Leaves of Dalmatian toadflax are shorter, wider, and broadbased, clasping the stem.

Yellow toadflax contains a poisonous glucoside that is reported to be mildly poisonous to cattle (Morishita 1991). However, the plant is considered unpalatable and reports of livestock poisonings are rare.

Yellow toadflax is quick to establish in open sites and is capable of adapting growth to a wide range of environmental conditions. Yellow toadflax aggressively forms colonies through adventitious buds from creeping root systems. These colonies can push out native grasses and other perennials, thereby altering and simplifying the species composition of natural communities and reducing forage production for livestock and wildlife.

Yellow toadflax has a highly variable habitat that depends on environmental factors such as shading, grazing, and soil type (Saner et al. 1995).

Yellow toadflax now occurs throughout the continental United States and in every Canadian province and territory (Saner et al. 1995). In Colorado, yellow toadflax is widespread. It is typically found from 6,000 to 8,500 feet, but can be found up to 10,000 feet.

Yellow toadflax was introduced from Eurasia as an ornamental.

Spring emergence occurs around mid-April and depends primarily on temperature. A smaller flush of seedlings can occur in the fall. Prostrate stems emerge in September and produce leaves that are egg-shaped, 0.9-1.5 in. Prostrate stems are tolerant to freezing and are associated with floral stem production the following year (Robocker 1974). The strong, upright floral stems that are characteristic of mature toadflax plants develop after a winter’s dormancy, and emerge about the same time as seedlings in mid-April. Flowering occurs from May through August and seeds mature from July through October (Saner et al. 1995). Yellow toadflax is self-incompatible and relies on insects for pollination. The two most important pollinators are bumblebees and halictid bees (Zimmerman 1996).

Yellow toadflax can reproduce both by seeds and vegetatively. Vegetative reproduction enables a stand of toadflax to spread rapidly. Stems develop from adventitious buds on primary and lateral roots. These buds can grow their own root and shoot system, and become independent plants the next year. Yellow toadflax colonies persist mostly via vegetation means while those of Dalmatian toadflax persist both by vegetative and seed reproduction (Lajeunesse 1999).

Seeds can remain dormant for up to ten years.

Yellow toadflax rapidly colonizes open sites. It is most commonly found along roadsides, fences, rangelands, croplands, clear cuts, and pastures. Disturbed or cultivated ground is a prime candidate for colonization. The seedlings of yellow toadflax are considered ineffective competitors for soil moisture with established perennials and winter annuals (Morishita 1991). However, once established, yellow toadflax suppresses other vegetation mainly by intense competition for limited soil moisture. Mature plants are particularly competitive with winter annuals and shallow-rooted perennials. 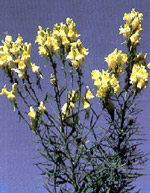