Flowerheads are broadly urn-shaped, 0.6-0.8 in tall, solitary or in clusters of 2-3 at the ends of the branches. Floral bracts are yellowish with a brownish margin, sometimes spotted, fringed on the sides, and terminating in a slender bristle or spine. The heads contain two types of flowers, ray flowers around the edges surrounding tubular disk flowers. The ray flowers are white, rose-purple, to lavender. June-Aug.

Seeds are light brown to black.

Stems are upright, 4-24 in tall, highly branched, angled, with short, stiff hairs on the angles.

Seedlings have finely divided leaves that are covered with short hair.

Diffuse knapweed may be distinguished from other knapweeds by the terminal spine on the floral bract.

Diffuse knapweed is a pioneer species that can quickly invade disturbed and undisturbed grassland, shrubland, and riparian communities. Once established, diffuse knapweed outcompetes and reduces the quantity of desirable native species such as perennial grasses. Diffuse knapweed contains allelopathic chemicals, which can suppress competitive plant growth and create single species stands (Watson and Renney 1974). The densities of these stands can range from 1-500 plants/m2. The replacement of native grassland with diffuse knapweed can reduce biological activity and increase soil erosion (Sheley et al. 1997).

Some people develop a rash when handling the plants.

Diffuse knapweed is now common in the Front Range counties, and has been reported in scattered infestations from both the east and west slope of Colorado.

Seed dispersal for diffuse knapweed is mainly by wind (Watson and Renney 1974). When the seed capsule sways in the breeze or is disturbed, the seeds fall from the small opening in top of the flower head and are distributed around the parent plant (Watson and Renney 1974). However, most of the involucres remain closed until the plant dries up, breaks off at ground level and effectively becomes a tumbleweed, allowing seeds to be individually dispersed over long distances (Zimmerman 1997). Diffuse knapweed stalks readily lodge under vehicles, expanding their long distance dispersal. 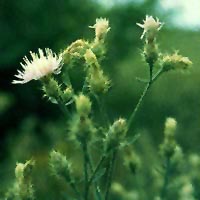