The three-capsuled fruits of cypress spurge explode at maturity, ejecting the seeds.

Mature plants are about 1-1.5 feet tall.

The entire plant exudes a white, milky sap that can be irritating to the skin.

Can be distinguished from leafy spurge (Euphorbia esula) by its slender stems with numerous, crowded, narrow leaves.

Its milky latex is toxic, but it is rarely consumed in quantities sufficient to cause serious injury. Animals should not be pastured where spurges grow. It does not tolerate intensive cultivation and is not a problem in crops.

Cypress spurge is weedy plant that invades disturbed areas. Cypress spurge can reproduce rapidly, and quickly invade an area. Its ability to spread vegetatively is a major factor contributing to its success.

Humans should be careful to avoid contacting the latex with bare skin.

Not yet widespread in Colorado. An escaped ornamental in some areas.

Plants overwinter as seed or root and crown tissue. Over-wintering buds develop on the indeterminate roots (Stahevitch et al. 1988). New shoots emerge, and seeds germinate, each spring soon after the snow cover melts. Flowering begins the first or second week of May. Seeds may mature as early as the third week in June. A second flowering often occurs in late summer or early fall. 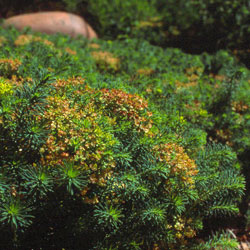 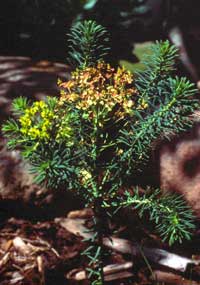