Colorado Noxious Weed List A
New in Colorado – call your county weed supervisor if you find this plant!

Flower heads are small, numerous, and have 4-8 rose or pink colored flowers. The flower bract tips are recurved (bending downward) or spreading, with the terminal spine longer than the lateral spines on each bract.

Mature plants are typically between 12-18 in tall with highly branched stems.

Often confused with diffuse knapweed (Centaurea diffusa), but differs principally in the fact that it is a true perennial, and bracts are recurved. Unlike diffuse knapweed, seed heads of squarrose knapweed are highly deciduous, falling off the stems soon after seeds mature.

Squarrose knapweed is a highly competitive weed that can displace native rangeland plants. It aggressively grows in dry disturbed areas, particularly in sand or cinders such as roadsides or cinderpits. Like other knapweed species, squarrose knapweed releases allelopathic chemicals that inhibit the growth of other plants.

Squarrose knapweed is found on plains, rangelands, and forested benchlands. In Utah, squarrose knapweed grows mostly in big sagebrush-bunchgrass rangeland, but it is also found at higher and lower elevations in juniper and salt desert range, respectively (Roché 1999). It is generally found on light, dry, porous soils. It prefers open habitats to shaded areas. Squarrose knapweed is not common on cultivated lands or irrigated pasture because it cannot tolerate cultivation or excessive moisture.

Not yet widespread in the western United States, but established in California, Utah, Oregon and Washington.

Seeds may remain viable in the soil for several years. 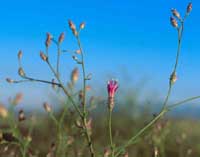