Flowering heads are solitary at the ends of branches. The floral bracts are stiff and tipped with a dark comb-like fringe. The flowers are pinkish-purple or rarely cream colored.

Seeds have a tuft of persistent bristles.

Rosette leaves are up to 6 in long, and deeply lobed. The principal stem leaves are pinnately divided, have smooth margins, and become smaller toward the top of the shoot. Leaves are alternate.

Mature plants are 1-3 ft tall with one or more stems.

Spotted knapweed has a stout taproot.

Spotted knapweed is a highly competitive weed that invades disturbed areas and degrades desirable plant communities. It forms near monocultures in some areas of western North America (FEIS 1998). There is evidence that spotted knapweed may produce allelopathic chemicals that inhibit the growth of other plants (Rutledge and McLendon, 1998). Spotted knapweed infestations in Montana had higher surface water runoff and higher sediment yields than bluebunch wheatgrass-dominated sites (Lacey et al. 1989).

The sap of spotted knapweed can cause skin irritation in some people. As a precaution, anyone working with spotted knapweed should wear protective gloves and avoid getting knapweed sap into open cuts or abrasions. Workers should wash their hands and exposed skin with soap and water following contact with this plant.

Spotted knapweed infestations are not as severe in Colorado as diffuse knapweed (Beck 1997). However, this weed spreads rapidly and is quickly becoming more common. In Colorado, it is commonly found between 4,000 to 6,000 feet, but has been found as high as 10,000 feet (A. Green, pers. comm.).

Spotted knapweed germinates in spring or fall (Beck 1997). Spotted knapweed seedlings develop into and remain as rosettes for at least one growing season while root growth occurs (FEIS 1998). It usually bolts for the first time in May of its second growing season and flowers August through September (Rutledge and McLendon, 1998). Individual flowers bloom for 2-6 days (FEIS 1998). Plants are self fertile and are also cross-pollinated by insects.

Plants may produce up to 140,000 seeds per square meter (Rutledge and McLendon, 1998). Most seeds are shed immediately after reaching maturity.

Knapweed seeds are often spread in hay and on vehicle undercarriages. 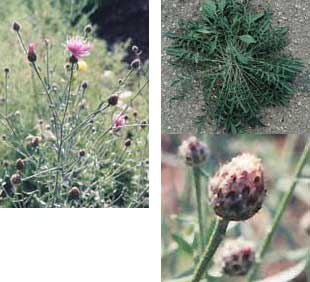