Flower heads are numerous, 1-2 in wide, with spine-tipped bracts. Flowers are violet to reddish.

Leaves are alternate, large, irregularly lobed, and have sharp yellow spikes. Rosette leaves may be up to 2 ft long and 1 ft wide (Whitson et al. 1996). Upper and lower leaf surfaces are covered with a thick mat of cotton-like or woolly hairs, giving the foliage a gray-green color (Dewey 1991).

Mature plants can grow up to 12 ft tall. Stems are numerous, branched, and have broad spiny wings.

Onopordum acanthium is the predominant Scotch thistle species in the western United States and is characterized by its hairy leaves (Beck 1991). A hairless species, Onopordum tauricum, also occurs but much less frequently, mostly in the Arkansas River drainage in Colorado (Beck 1991).

There are many native thistle species (in the genus Cirsium). The natives generally do not have leaves clasping the stem all the way from node to node (strongly decurrent leaves), and many have hairy upper and lower leaf surfaces and are blue-green or gray in color.

Scotch thistle is an aggressive plant that is competitive with desirable native forage species. It can form dense stands that are impenetrable to livestock.

Scotch thistle is often found along roadsides, irrigation ditches, waste areas and on rangelands. It is especially fond of areas that are adjacent to riparian or sub-irrigated deeper soils along stream courses, lower alluvial slopes and bottomlands.

Occurs sparsely over much of the United States. It is increasing in densities throughout Colorado.

Scotch thistle is a biennial that produces a large, ground level rosette the first year, and a tall, spiny plant the second. Flowering occurs from mid-June to September.

Seeds may remain viable in the soil for over 30 years.

Plumed seeds can be dispersed by attaching to clothing and animal fur. Seeds may be transported in hay and machinery, and seeds may be carried by wind and water. 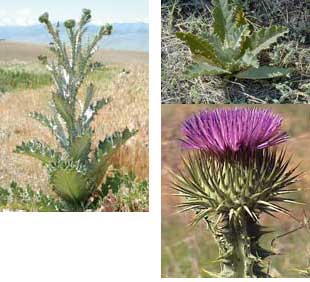