The flower heads of Russian knapweed are urn-shaped, solitary, and composed of disk flowers only (Zimmerman 1996). Floral bracts are broad, oval, entire, and greenish at the base with papery, finely hairy edges. Flowers are numerous, all tubular. The petals are pink or purple, turning straw colored at maturity.

Seeds are oval and compressed. Seeds are grayish or ivory, with long white bristles (pappus) at the tip when young, but these fall from the seed as it matures.

Leaves are alternate. Lower stem leaves are narrowly oblong to lance-shaped, and deeply lobed. The upper leaves are oblong, toothed, and become progressively smaller. Rosette leaves are lance-shaped, tapering at both ends with the broadest part at the tip.

Mature plants are between 18-36 in tall. The stems are erect, thin, stiff, branched, and when young are covered with soft, short, gray hair (Zimmerman 1996).

Russian knapweed has a well-developed root system, which functions as the major means of propagation and spreading. The roots are easily recognizable by their black or dark brown color and presence of small alternately arranged, scale leaves, which support buds in their axils (Zimmerman 1996).

The cotyledons (seed leaves) are oval. The first true leaves are alternate, and lanceolate with shallow toothed or smooth edges. The surface of the leaves looks grayish-green, but is not hairy.

Russian knapweed can be distinguished from other knapweeds by the pointed papery tips of the floral bracts.

Russian knapweed can commonly be found along roadsides, riverbanks, irrigation ditches, pastures, waste places, clearcuts, and croplands, especially in areas of high water tables. It is not restricted to any particular soil but does especially well in clay soil. Watson (1980) observed that Russian knapweed infestations increased in dry locations but decreased in moist locations due to competition with perennial grasses.

Russian knapweed is native to Eurasia, and was probably introduced to North America as a contaminant in crop seed.

Russian knapweed spreads by creeping horizontal roots and seed. Shoots emerge early in spring shortly after soil temperatures remain above freezing. All shoot development originates from root-borne stem buds (Watson 1980). These buds arise adventitiously at irregular intervals along the horizontal roots. Plants form rosettes and bolt in late May to mid-June. Russian knapweed flowers from June to October (Zimmerman 1996). It does not appear to reproduce extensively from seed.

Russian knapweed reproduces primarily vegetatively. The root system consists of the original root (taproot), one to many horizontal roots, and their vertical extensions. Buds on the horizontal roots can form adventitious shoots that may grow to be independent plants.

A single plant may produce 1,200 seeds per year.

Knapweed seeds are often spread in hay and on vehicle undercarriages. 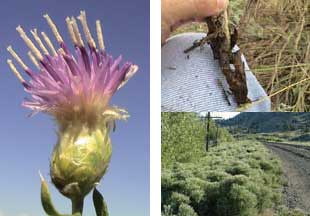