Flowers are purple with 5-7 petals arranged in long vertical racemes.

Fruits are many-seeded capsules, seeds are small and ovoid.

Leaves are simple, entire, and opposite or whorled (Whitson et al. 1996).

Annual stems arise from a perennial rootstock (Mal et al. 1992). Stems are erect, and often grow 6-8 ft tall. Plants become taller and bushier over the years as the rootstock matures.

Sometimes confused with fireweed (Epilobium spp.), which have 4-petaled flowers.

Purple loosestrife usually occurs in marshes, wet meadows, stream margins, shores of lakes and wetlands. Purple loosestrife can tolerate a wide range of conditions (up to 50% shade), can grow on calcareous and acidic soils (Rutledge and McLendon) and will even grow in standing water.

In Colorado, purple loosestrife is known to occur in the Denver/Boulder area and downstream along the South Platte River, in Mesa County along the Colorado River, in Montrose County near Nucla, in Otero County near the Arkansas River, and in Colorado Springs. It is not known if purple loosestrife has upper elevational limits, but since it grows successfully in Canada, it should be considered a threat at higher elevations in Colorado.

Purple loosestrife is a native of Eurasia and was first recorded in America in 1814 (Bender and Randall 1987).

Purple loosestrife begins its growth about a week to 10 days after cattail and reed canarygrass. Spring established seedlings grow rapidly and produce flowers 8 to 10 weeks after germination. After flowering, each stem supports a dense spiraling row of dark-brown seed capsules.

Purple loosestrife is a perennial that reproduces by seeds and rhizomes. The rootstalk of purple loosestrife is the main organ of local propagation; therefore, wide vegetative spread is unlikely. However, detached root or stem fragments can take root and develop into flowering stems (FEIS 1998).

Purple loosestrife seeds may remain viable for up to 20 years.

Seeds are mainly distributed by water, but can also be dispersed by animals and humans. Seeds do not drop from capsules until the air temperature becomes cold in the early fall. 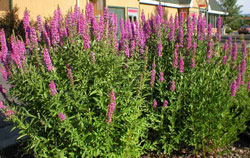