Mature plants can grow as tall as 6 ft. It can appear solitarily or with several stems from one base, and is highly branched above.

There are many native thistle species in the genus Cirsium. The natives generally do not have leaves clasping the stem all the way from node to node (strongly decurrent leaves), and many have hairy upper and lower leaf surfaces and are blue-green or gray in color.

Likely to infest pastures. Is unpalatable to livestock.

Musk thistle is a highly competitive weed which invades disturbed areas, pasture, rangeland, forest land, cropland, and waste areas throughout most of the United States. Musk thistle spreads rapidly and forms extensive stands, which force out desirable vegetation (Rutledge and McLendon, 1998). Musk thistle may produce allelopathic chemicals that inhibit desirable plants beyond the spread of the rosettes (Wardle et al. 1993).

In Colorado, musk thistle is found up to approximately 10,000 feet in elevation (Beck 1999). It is found throughout North America.

Seeds germinate in the fall, forming a rosette of leaves. Typically, musk thistle over-winters as a rosette and bolts the following spring between April-June. Flowering begins in late May or early June and continues through mid-July (Butterfield et al. 1996). Seeds mature and are dispersed 1 to 3 weeks after flowering. Seedlings establish only on bare soils and grow less when shaded by neighboring plants (Beck 1999).

Musk thistle is a prolific seed producer. Average productivity is approximately 10,000 seeds/plant, however, a single plant can produce up to 100,000 seeds (Beck 1999).

Seed dispersal is by wind water, wildlife and livestock (Beck 1999).

Wardle, D. A., K. S. Nicholson and A. Rahman. 1993. Influence of plant age on the allelopathic potential of nodding thistle (Carduus nutans) against pasture grasses and legumes. Weed Research 33:69-78. 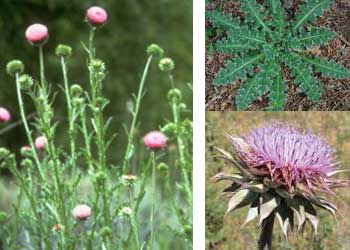