Flowers are yellowish-green, small, arranged in numerous small clusters and with by paired heart-shaped yellow-green bracts below. May-July.

Seeds are oblong, grayish to purple, contained in a 3-celled capsule.

Leaves are alternate, narrow, 1-4 in long.

Mature plants are up to 3 ft tall. Stems are thickly clustered.

Seed leaves (cotyledons) are linear to lanceolate, with smooth margins.

The entire plant contains white, milky latex. Foliage of the plant is smooth and hairless.

Leafy spurge can invade rangeland that is in excellent condition, making it worthless for cattle and horse grazing and reducing land values (Lajeunesse et al. 1999).

The milky latex associated with leafy spurge can cause irritation, blotching, blisters, and swelling in sensitive individuals.

Leafy spurge grows in a wide range of habitats. It is most aggressive in semi-arid areas, but can be found in arid to subhumid and subtropic to subarctic habitats (Butterfield et al. 1996). Leafy spurge occurs most commonly on untilled, non-crop areas such as rangeland, pastureland, woodland, prairies, roadsides, stream and ditches, and waste sites. It grows on all kinds of soils, but is most abundant in coarse-textured soils and least abundant on clayey soils (Butterfield et al. 1996).

Leafy spurge is one of the earliest plants to emerge in the spring, usually in mid-April to late May (Butterfield et al. 1996). The development of terminal flower clusters begins 1 to 2 weeks after stem emergence. Flower clusters have 8 to 16 branches. Each branchlet forms a greenish yellow bract in May. Flowering generally ends in late June to mid-July, and growth is reduced, during the hotter portion of the summer. However, if conditions are favorable, leafy spurge may produce a few lateral flowers throughout the summer and in the fall. Thus, it is possible for the plant to produce seed until frost. Seeds mature about 30 days following pollination. Peak germination occurs from late-May to early June. If adequate moisture is present, germination can occur throughout the growing season.

Despite being a successful seed producer, leafy spurge primarily reproduces vegetatively through its extensive lateral root system. Long roots have the capability to produce shoots and can reach nearly 15 feet laterally, and about 30 feet deep. As many as 300 buds have been counted on these long roots (Butterfield et al. 1996).

Seeds can remain viable in the soil for 5-8 years although 99% of the viable seeds will germinate in the first two years (Butterfield et al. 1996).

The three-sided capsules explode when ripe, sending the enclosed seeds up to 15 feet from the parent plant. Seeds are covered in a sticky gell that can easily attach to animals and humans. Seeds float on water, and can be transported and deposited by flood water.

The milky latex associated with leafy spurge can cause irritation, blotching, blisters, and swelling in sensitive individuals. The eyes should never be rubbed until after the hands are thoroughly washed. Gloves should be worn while coming into contact with this plant (suggested cultural controls or ways to prevent spread). 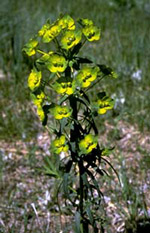