Leaves are alternate, 1.6-4 in long, blue green, and lance-shaped. Lower leaves are stalked, while the upper leaves have two lobes clasping the stem.

Mature hoary cress plants are up to two ft tall with erect stems.

Roots are rhizomatous and usually occur at depth of 29-32 inches, but have been recorded to penetrate to a depth of 30 ft in the Pacific Northwest (FEIS 1998).

Two other closely related species Cardaria pubescens and Cardaria chalapa are designated as noxious weeds in some states (Sheley and Stivers 1999).

Hoary cress is invading rangelands throughout North America. It is a highly competitive weed once it becomes established. Hoary cress spreads primarily by extremely persistent roots and will eventually eliminate desirable vegetation and become a monoculture.

It is widespread in the United States except along the southern boundary of the western and south-central states (USDA 1971). In Colorado, hoary cress is commonly found at elevations of 3,500 to 8,500 feet.

Hoary cress is a weed of Eurasian origin.

The root system of hoary cress consists of vertical and lateral roots from which new rosettes and flowering shoots arise (Mulligan and Findlay 1974). Plants emerge in very early spring. The first leaves appear aboveground 5 to 6 weeks after planting (Mulligan and Findlay 1974, FEIS 1998). During this period, the first leaves emerge and form a loose rosette (Mulligan and Findlay 1974, FEIS 1998). Stems arise from the center of each rosette in late April (FEIS 1998). Plants flower from May to June, are self-incompatible, and are pollinated by insects. Hoary cress plants set seed by mid-summer (Whitson et al. 1996). If conditions are favorable, a second crop of seeds can be produced in the fall (Sheley and Stivers 1999).

Reproduces both by seeds and vegetatively. Hoary cress spreads vigorously by creeping roots (FEIS 1998). Within three weeks of germination, a seedling root can begin producing buds (FEIS 1998). One plant can eventually result in a large colony and push out other vegetation to form a monoculture.

84% of seed produced are viable the first season (Mulligan and Findlay 1974, FEIS 1998). Buried seeds can remain viable for three years in the soil (Sheley and Stivers 1999). 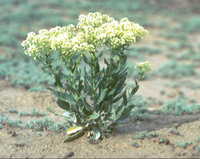