Seedpods are black or purplish-brown, one-celled, with a single seed.

There are two types of leaves, basal and stem. The basal rosette leaves are 3-4 in, oblong, lance-shaped, and connected to the stem by a petiole. The upper stem leaves are simple, alternate, bluish-green, with a whitish nerve on the upper surface of the blade. These leaves clasp the stem with ear-like projections, and decrease in size toward the top of the stem. All leaves have a slight pubescence and are nearly entire, but occasionally toothed.

It has a thick taproot that may grow 5 ft long.

Dyer’s woad is an aggressive weed that infests disturbed and undisturbed sites and then spreads outward into crops and rangeland. The BLM projects that infestations of dyer’s woad increase 14% annually, and the Forest Service believes that it has increased several fold on Intermountain forests during the past three decades. There is some evidence that dyer’s woad produces allelopathic chemicals.

Dyer’s woad appears to be well adapted to the physical and environmental conditions of the Intermountain states. It is especially well suited to dry, rocky, soils common to many steep hillsides throughout the western United States. Infestations are frequently observed in rugged inaccessible mountain terrain. Dyer’s woad is also commonly found on disturbed sites, along roadsides, waste areas and rights-of-way.

Not yet widespread in Colorado however small populations have been sighted.

In Europe, dyer’s woad has been cultivated as a source for blue dye and for medicinal properties since the 13th century.

Established dyer’s woad plants begin growth early in the year. The plant has a deep tap root as well as roots near the soil surface. Early growth plus the two-tiered root system probably account for its competitive ability. Undisturbed dyer’s woad plants behave as biennials or winter annuals and typically require portions of two growing seasons to produce seed. Dyer’s woad germinates in the fall or early spring. The seedlings develop rosettes that produce large taproots during the first year. During the winter the plants undergo vernalization. The following spring, new leaves grow from the crown bud in the rosette, and bolting begins. Flowering occurs in late spring, with the exact timing dependent upon elevation.

Hundreds of seedpods, each containing one seed, are produced anywhere from 4-6 weeks after flowering begins.

Seeds do not remain viable in the soil for long periods of time. 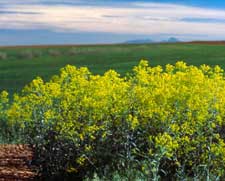 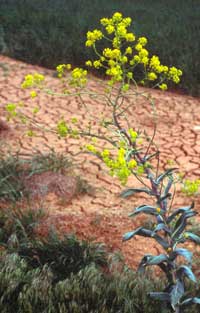