Fruits are egg-shaped to nearly round capsules. Seeds are sharply angular, and slightly winged.

Leaves are broad, ovate to ovate-lanceolate, and are alternate, generally clasping but crowded.

Mature plants are up to 3 ft tall. A single toadflax plant contains from 1-25 vertical, floral stems. which are thick-walled and somewhat woody.

The taproot may penetrate 3 ft into the soil. Horizontal roots may grow to be several yards long, and can develop adventitious buds that may form independent plants.

Yellow toadflax (Linaria vulgaris) is similar in appearance, but has more linear pointed leaves, and is generally a smaller plant.

Low-till cultivation practices have contributed to the resurgence of toadflax populations on agricultural lands (McClay 1992). Dalmatian toadflax contains a glucoside, a quinoline alkaloid, and peganine which make it toxic to livestock (Rees et al. 1996). However, Dalmatian toadflax is generally considered unpalatable, and reports of livestock poisonings are rare.

Dalmatian toadflax is a persistent, aggressive invader and capable of forming colonies through adventitious buds from creeping root systems. These colonies can push out native grasses and other perennials, thereby altering the species composition of natural communities. New infestations of Dalmatian toadflax can occur in naturally occurring disturbances or in small openings in pristine or excellent-condition rangeland (Lajeunesse 1999). Dalmatian toadflax can rapidly colonize open sites. It is most commonly found along roadsides, fences, rangelands, croplands, clear cuts, and pastures. Disturbed or cultivated ground is a prime candidate for colonization. Toadflax can significantly reduce crop yields and stress native communities. In one study, toadflax-free plots produced 2.5 times more grass than plots where toadflax was present (Robocker 1974). The seedlings of toadflax are considered ineffective competitors for soil moisture with established perennials and winter annuals (Morishita 1991). However, once established both species of toadflax suppress other vegetation mainly by intense competition for limited soil water. Mature plants are particularly competitive with winter annuals and shallow-rooted perennials (Robocker 1974).

Dalmatian toadflax can adapt its growth to fit a wide range of environmental conditions, and is tolerant of low temperatures and coarse-textured soils.

In Colorado, Dalmatian toadflax is commonly found between 5,000 to 6,500 feet in oak, aspen, sagebrush, mountain brush, and riparian communities. It can be found growing up to 9,000 feet (A. Green)

Spring emergence occurs about mid-April and depends primarily on temperature. During the first year the plant forms a rosette and develops a deep root system. Prostrate stems emerge in September and produce egg-shaped leaves. Prostrate stems are tolerant to freezing and are associated with floral stem production the following year (Robocker 1974). The strong upright floral stems that characterize mature toadflax plants develop after a winter’s dormancy, and emerge about the same time as new seedlings in mid-April. A single plant will produce from 1-25 floral stems. Flowering occurs from May-August and seeds mature from July-September. Dalmatian toadflax can also reproduce vegetatively. Stems develop from adventitious buds on primary and lateral roots. Vegetative reproduction from root buds can occur as early as 2-3 weeks after germination, and is possible from root fragments as short as 1 cm long (Zimmerman 1996). These buds can grow their own root and shoot systems, and become independent plants the next year. In addition to promoting growth, the large, deep, root systems of Dalmatian toadflax exploit water efficiently. The taproot may penetrate 3-4 feet into the soil and lateral roots may be 6-12 ft long. (periods of growth, emergence, bolting, flowering and seed production)

By seeds and vegetatively.

Seeds may remain viable in the soil for up to ten years. 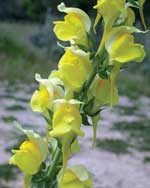 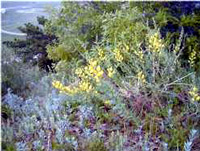