Yellow starthistle is a member of the sunflower family (Asteraceae). In most locations it is a winter annual. It has yellow tufted flowers that grow on the end of branched stems. The flowers have bracts below with a central sharp stiff spine that drops off after the seedhead matures. Older flowers drop their petals and only cottony chaff remains, known as the Q-tip stage. Flowering occurs early summer through fall.

Rosettes leaves are pea-green with toothed edges. Once the plant begins to bolt, the rosette leaves dry up. The mature stems are winged and covered with fine hairs, giving the plant a grayish-green appearance.

Plants grow to 3.3 feet tall and have a taproot that can be over three feet long.

Plants can be controlled by removal, but in areas that get multiple germination flushes, you must return frequently to ensure no plants mature. In most areas, using a selective herbicide is the best choice.

Yellow starthistle can cause chewing disease in horses and if they ingest enough, it can be fatal. Other livestock do not appear to be affected.

Although native to Eurasia, it first showed up in California in the early to mid-1800s and is thought to have arrived as a contaminate in alfalfa seed from Chile. At the time, only alfalfa seed from Chile was planted in California. The yellow starthistle in Chile is thought to have been introduced from Spain. Herbarium records for Colorado show that it was first reported in Boulder County in 1949. Since 1999, has been found in isolated spots in other Front Range and West Slope locations. 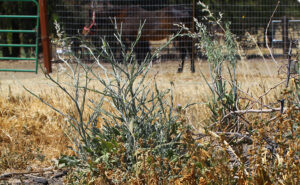 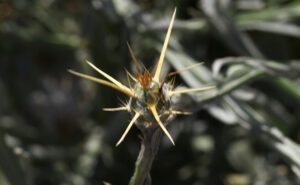 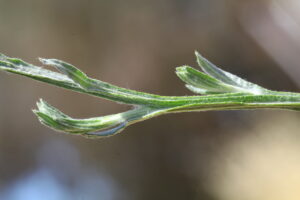 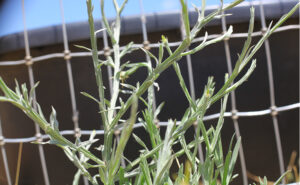 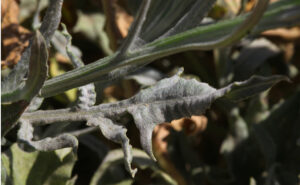