Spotted knapweed is a List B noxious weed thought to have been introduced to the US in 1893 as a contaminant in alfalfa seed and through soil in ship ballast.  Originally from Eurasia, this species has been found in most US states and 47 counties in Colorado.

It usually grows as a biennial but sometimes as a short-lived perennial.  It is found in rangeland, rights-of-way, and disturbed sites.

Rosettes germinate in fall and spring and can easily be controlled by removal or herbicide treatment.

Plants are light green, 1 to 3 feet tall with 1 to 10 stems growing from the crown.

The compound light purple flowers, somewhat thistle-shaped, form at the ends of terminal and auxiliary stems.  The flower bracts are usually somewhat oval, with slightly spined edges and distinctive dark areas usually near the tip.

Each plant produces 450-4500+ seeds.  The majority of the seeds fall within a few feet of the mother plant.  Seeds can stay viable in the soil for about 8 years.  Spotted knapweed reproduces mainly by seed but occasionally plants will also grow from short lateral roots.

Blair and Hufbauer’s 2009 study answered a lot of questions about knapweed hybridization.  They showed that spotted knapweed found in the US is not a hybrid but that most diffuse knapweed is.

Identifying hybrids based on physical characteristics can be tricky in the field and a definitive ID really cannot be done without genetic assessment. 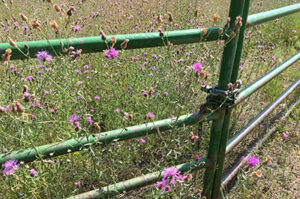 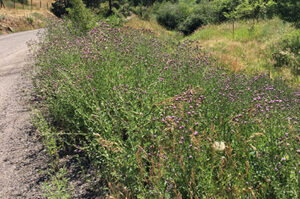 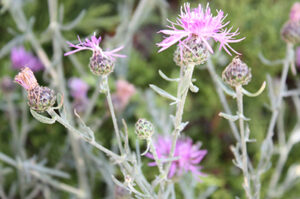 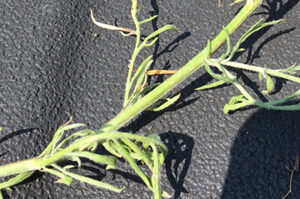 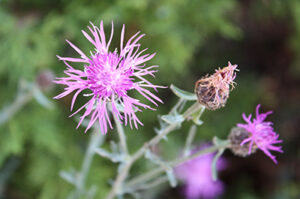