Russian knapweed is a herbaceous perennial in the sunflower family (Asteraceae).  Originally from Eurasia, it was introduced to North America in the late 1800’s as a seed contaminant in alfalfa. This List B noxious weed is found in many disturbed areas such as pastures, grasslands, and roadsides. Russian knapweed has been found in most counties in Colorado.

The leaves are generally 1½ – 4 inches long, attached to erect and branched stems. It has pinkish to lavender colored flowers and blooms from June to August. The flower heads have tan, rounded bracts with papery tips. Russian knapweed reproduces by seed but more often by its creeping roots.  The roots can grow horizontally to about 15 feet and vertically to about 22 feet.  New plants can easily form from root fragments as small as an inch.

Currently, the most effective control method is herbicide, which can be applied during the bud to flower stage (Spring to Summer) or when plants are in the rosette stage. Hand pulling is not recommended because plants regrow from the small root fragments left behind. Grazing is not recommended.  Animals avoid Russian knapweed due to its bitter flavor.  The plant contains neurotoxins that causes chewing disease in horses which can be fatal.

Recently biological control has been used in areas where Russian knapweed is very prevalent.  Biocontrol for Russian knapweed includes the gall midge, Jaapiella ivannikovi, and a gall wasp, Aulacidea acroptilonica.

What You Can Do: 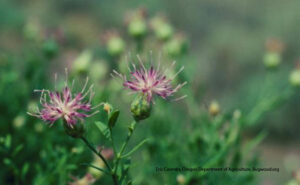 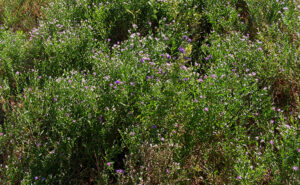