Mediterranean sage (Salvia aethiopsis) is a List A biennial in the mint family (Lamiaceae).  It was first noted in Colorado in 1957 and added to the state’s weed list in 2003.  It is found in most western states but has only been noted in four counties in Colorado.

Med sage plants grow from a taproot to about three feet tall, have wooly leaves that are smaller near the ends of square stems.  Rosette leaves are wooly, triangular with indented margins, and 4-12 inches long.  Plants have a main stem that then branches, similar to a candelabra.

One-half inch long white to light-yellow-colored flowers grow at the ends of the branched stems.  The flowers have two upper petals that are horn-like and three lower petals that form a lip with the two outer petals longer than the center.  The calyx has spine tipped teeth.  Each flower forms 4 nutlets.

Livestock avoid it, possibly due to the woolly leaves and the chemicals that give the foliage its distinctive smell.

Mediterranean sage can be found in sagebrush, rangeland, and rights-of-way.  It is easy to kill by removal or with herbicide.  Plants break off in the fall and become tumbleweeds that spread its seed across large areas.  Each plant can produce up to 100,000 seeds. 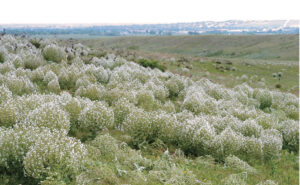 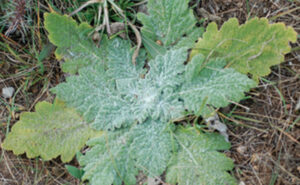 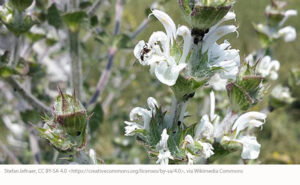