Houndstongue is a member of the Boraginaceae family. It is usually a biennial but occasionally acts as a short-lived perennial. It has hairy oblong leaves that form a rosette the first year. In early-spring to mid-summer in its second year, it starts to bolt. Between 1-8 stems grow from the crown. They can reach a height of 40+ inches. The stems have reduced leaves. Purple to magenta, five-lobed flowers are arranged loosely along the flower stem. Each flower is less than 4/10 inch wide and when mature, forms a four-parted seed head called a nutlet. Each nutlet contains one seed. The nutlets are covered with barbs that can latch onto fur, gear, and equipment.

The plants have a deep (to 40 inches), thick taproot but are easy to pull when very young. If the plants have started to bud, they should be securely bagged and thrown in the trash. Houndstongue is also easily controlled with herbicide if treated pre-flower.

Most (~75%) seeds fall within a few inches of the mother plant. Longer dispersal distances are via animals.

Known since 1830 in the US and 1897 in Colorado, Houndstongue is originally from Eurasia. It is thought to have arrived in North America in contaminated cereal seed. It is not strongly competitive but takes advantage of disturbance.

Houndstongue contains pyrrolizidine alkaloids and is poisonous to livestock. These alkaloids may be found in higher levels at the rosette stage. Animals tend to avoid live plants but when it is found in dried hay livestock will consume enough to be affected. 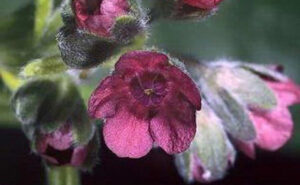 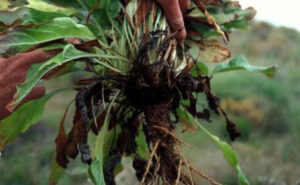 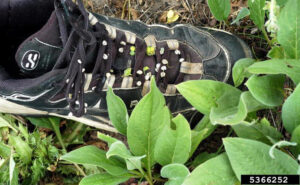 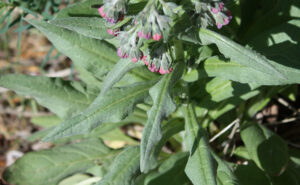