Dyer’s woad, a Colorado List A noxious weed, is a member of the mustard family (Brassicaceae). It is a winter annual, biennial, or short-lived perennial forb that reproduces by seed.

The 1/8th inch wide, yellow, four-petaled flowers are clustered at the end of stems. It has 1/4-inch-wide, 3/8-inch-long seedpods that turn purplish-brown when mature and hang from a short stalk.  Each seedpod contains one seed.

Plants grow 1 to 4 feet tall. Leaves are blueish green with a whitish vein on the upper surface. There are two types of leaves. Basal leaves are 3-4 in, oblong, lance-shaped, and connected to the stem by a stem (petiole). Stem leaves are simple, alternate, clasp the stem with ear-like projections.  Lower stem leaves are up to 7 inches long and decrease in size toward the top of the stem. All leaves are slightly hairy.  Dyer’s woad has a thick tap root that can be more than 5 feet long.

Dyer’s woad likes dry, rocky, soils common to many steep hillsides throughout the western United States. Infestations are often seen in rugged inaccessible mountain terrain. It is also commonly found on disturbed sites, along roadsides, waste areas and rights-of-way.  Dyer’s woad is aggressive and also infests crops and rangeland. The BLM projects that infestations of dyer’s woad increase 14% annually, and the Forest Service believes that it has increased several fold on Intermountain forests during the past three decades.

In Europe, Dyer’s woad has been cultivated as a source for blue dye and for medicinal properties since the 13th century.

Control options include pulling before flowering or treating with herbicide at the rosette to early bolt stage.

Not yet widespread in Colorado however small populations have been sighted.  If you find Dyer’s woad, report it to your county weed manager. 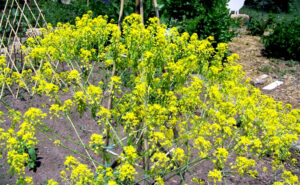 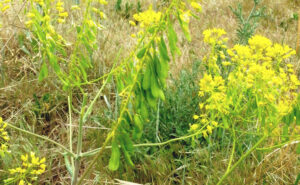 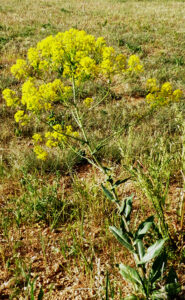 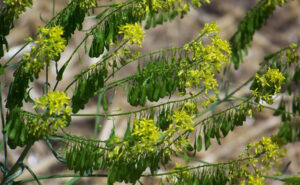