Common mullein is a List C biennial that reproduces by seed.  Each plant can produce over 200,000 seeds that can last in the soil for 70 to 100 years.

Common mullein is an early invader in disturbed sites and can move into natural areas and form large monocultures.

Each plant grows from a thick taproot and sends up a central stalk that forms long flowerheads with yellow flowers.  The hairy leaves are smaller as they form up the stalk and are mainly at the base of the plant.  First year plants germinate in the fall or spring and spend their first year as a rosette.  Leaves are blue-gray and 1 to 5 inches wide and up to 12+ inches long.  Plants can grow to 6+ feet tall.

Originally from Eurasia and northern Africa, Common mullein arrived in North America in the 1700s and was dispersed intentionally and unintentionally by settlers as they moved across the continent.

Common mullein can serve as a reservoir for agricultural pests and has been used as a piscicide to kill fish.  It has also been used as an herbal remedy.

Control includes mechanical or chemical options.  Common mullein can easily be controlled by removal of the rosette before the flower stem starts to form.  If removing after the flowers form, the stalks will need to be bagged and placed in the trash.  It is not recommended to remove old, dried stems because most seed have already dropped.  If using herbicides, it is best to include a good surfactant to ensure good contact with the leaf. 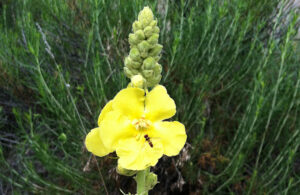 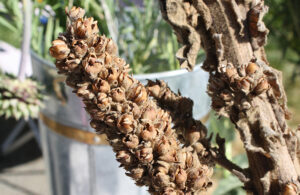 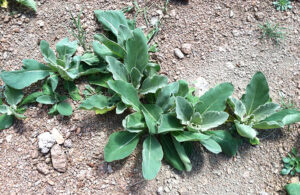