Artemisia absinthium, is a Colorado List B member of the Sunflower family (Asteraceae). This aromatic perennial grows to 3-5 feet tall.  It has drooping drab-yellow disk (rayless) flowerheads that grow in the axis of leaves at the ends of its many branches.  It flowers mid to late summer.

Ridged stems grow from the crown of its taproot.  The stems dry out in the fall and persist through the winter.  The dried stems help to more easily spot infestations in the spring as new growth starts at the base.

Both the leaves and stems are covered with fine hairs giving the plant a grayish appearance.  The leaves are up to 5 inches long, deeply lobed, olive green above and white below.  Leaves attach directly to the stem and are arranged alternately. The leaves towards the ends of the stems are smaller and linear.

It reproduces by seed and each plant can produce up to 50,000 seeds a year. The seed last in the soil for 3-4 years, or longer.

Absinth wormwood invades range, pasture, and disturbed areas. It is toxic to wildlife and livestock.  Maintaining a healthy site can be effective in preventing its establishment.

Originally from Europe, Absinth wormwood has been used to make Absinthe, a spirit popular in the 19th and early 20th century. It had been thought to cause hallucinations and madness so was banned in many areas of the world.  More recent studies have shown that the level of thujone, the absinth wormwood compound found in Absinthe, was probably not high enough to cause the effects which were due instead, to effects of alcohol over-indulgence. 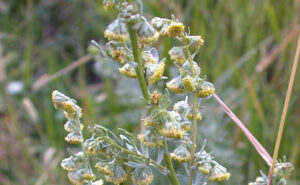 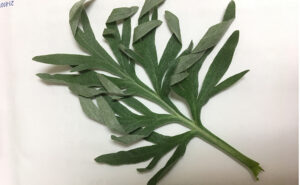 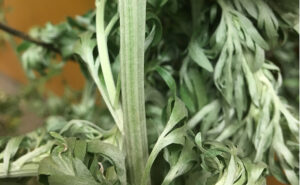 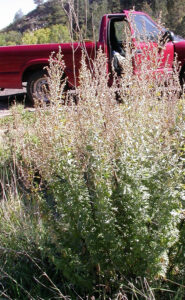 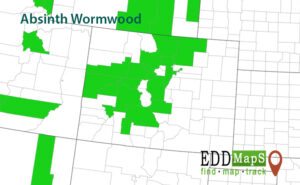