The fruits are four-angled, each contains a single seed.

Rosette leaves are conspicuously veined, with stiff prickles on the lower midrib (Whitson et al 1996). Stem leaves are simple, opposite, net-veined, stalkless, and clasp the stem. Flowering plants have large, oblong, opposite leaves that form cups, which are capable of holding water (Wisconsin DNR 1998).

Mature plants can grow up to over six ft tall. The stem is rigid, furrowed (straight-angled), with several rows of downward turned prickles.

Common teasel is not considered palatable and is generally ignored by livestock. It displaces native vegetation and decreases range quality.

Common teasel can be an aggressive competitor in disturbed areas. Massive seed production and high germination allow it to quickly invade an area and out-compete other plants.

Common teasel is spreading rapidly in America, particularly in the Pacific Northwest. In Colorado, teasel is usually found in relatively moist, disturbed situations but can also be found moving into drier areas.

Common teasel is a native of Europe where it has historically had many uses. The heads of a cultivated variety of teasel are used for wool “fleecing”, or raising the nap on woolen cloth. (Grieve 1995). These heads are fixed on the rim of a wheel, or on a cylinder, which is made to revolve against the surface of the cloth (Grieve 1995). No machine has yet been invented which can compete with teasel in its combined rigidity and elasticity (Grieve 1995). The roots of common teasel are also reported to have various medicinal values ranging from a remedy for jaundice to a cleansing agent (Grieve 1995).

Common teasel is a biennial or sometimes monocarpic perennial. The plant grows as a basal rosette for a minimum of one year, and then sends up a tall, flowering stalk (Wisconsin DNR 1998). After flowering and seed set, the plant dies (Werner 1975). Flowering occurs from July to August.

Seeds can remain viable for at least two years. 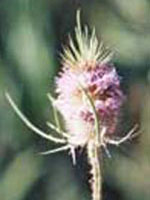 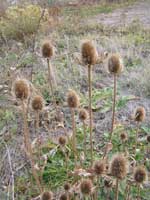